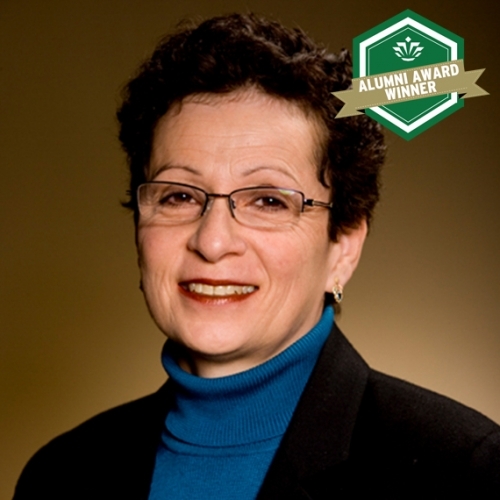 What advice do you have for current Belk College students, especially women?

The hallmarks of success are passion, determination and persistence. Do what you want to do and are driven to do – that’s passion. Do it in spite of anyone around you who says you can’t – that’s determination. If it doesn’t work out the first time – keep on trying; it will. That is persistence. Take advantage of every opportunity that comes your way. You never know where a path will lead. Heed the words of Thomas Edison: “Most people don’t recognize opportunity as it comes dressed in overalls and looks like work.”

What led you to earn an MBA at UNC Charlotte?

Not long after going to work for Duke Power Company I was interested in attending graduate school. I worked full-time and graduated with my MBA in 1979.

Did having an MBA help you advance in your career?

All of my jobs from 1981 to date have required an MBA or other graduate degree. The MBA has also provided me with the solid financial ground that now enables me to sit on corporate boards.

What led you to write the bestselling book, Her Story: A Timeline of the Women who Changed America?

It all started with an essay contest on Great Women in Engineering and Science for the Society of Women Engineers (SWE), Rocky Mountain Section. I began identifying and researching the historical scientific and technical women. Later, as a member of the national board of SWE, I volunteered to head up the National Medal of Science and the National Medal of Technology nominations. In 1991, I was in the White House Rose Garden accepting the Admiral Grace Murray Hopper’s National Medal of Technology. She was my first successful nomination to the National Women’s Hall of Fame in 1994. I eventually co-authored three books on the women’s rights movement and women’s entry into non-traditional professions with Betty Reynolds for the Setting the Record Straight series. In 2003, Charlotte Waisman and I began our collaboration to write a book about women in all fields of endeavor, placed in a chronological presentation.

How did you become so passionate about informing the public about women’s accomplishments?

I was admitted as an undergraduate student to the University of Virginia in the third class that admitted women and the first class that didn’t have a cap on the number of women that could be admitted. No one, not even my Ph.D. engineer father, suggested I consider engineering as a career. I was one of the first 10 women to graduate in engineering from UVa. Since I joined SWE over 35 years ago, I have worked to increase the number of women in the engineering fields and to increase the recognition that the women in engineering receive.

Why is it important?

I am passionate about telling the stories of all women across all fields of endeavor. Women’s stories are not told. I speak all over the country and people see my book and ask me, “Why didn’t we learn about these women in school?” I believe that by telling women’s stories we demonstrate that we value women. A society that values women values all of its people and is a better society.

What did your work at the National Women's Hall of Fame entail?

The primary focus of my job was raising money and fixing the business model. The Hall was in the process of adaptively rehabilitating an 1844 Limestone Mill in Seneca Falls, N.Y., the site of the first women’s rights convention in 1848, and transforming it into the Center for Great Women. I spearheaded our fundraising goal of $25 million.

Quote:
Jill S. Tietjen, P.E., MBA is the founder, president and CEO of Technically Speaking, Inc. She has served as the CEO of the National Women's Hall of Fame and was also inducted into the Colorado Authors' Hall of Fame. She was among the first 10 women to earn an engineering degree from the University of Virginia. Early in her career at Duke Power Company, Tietjen earned an MBA from UNC Charlotte, which has enabled her to hold many positions in engineering and on corporate boards. She is an advocate for women in technical and engineering fields and has worked to advance the public’s knowledge of women’s accomplishments throughout history.