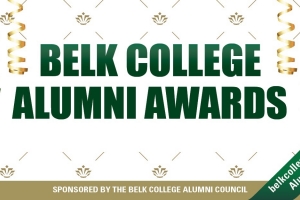 Monday, October 12, 2020
Honorees will be celebrated during a virtual event on Nov. 11

The Belk College of Business will honor four alumni and friends for their accomplishments, service and dedication to the college during the 2020 Belk College Alumni Awards on Nov. 11.

The sixth annual Belk College Alumni Awards ceremony, sponsored by the Belk College Alumni Council, will be broadcast through UNC Charlotte’s live stream and social media starting at 6 p.m. All alumni and friends are invited to register for the celebration.

Honorees will be celebrated during the awards, which also will recognize the college’s 50th anniversary. The ceremony will be hosted by Belk College Dean Jennifer Troyer.

“This year, we have another distinguished and diverse group of award recipients,” Troyer said. “We invite all alumni and friends to join us in celebrating these incredible business leaders by attending this year’s virtual celebration from wherever you are.” 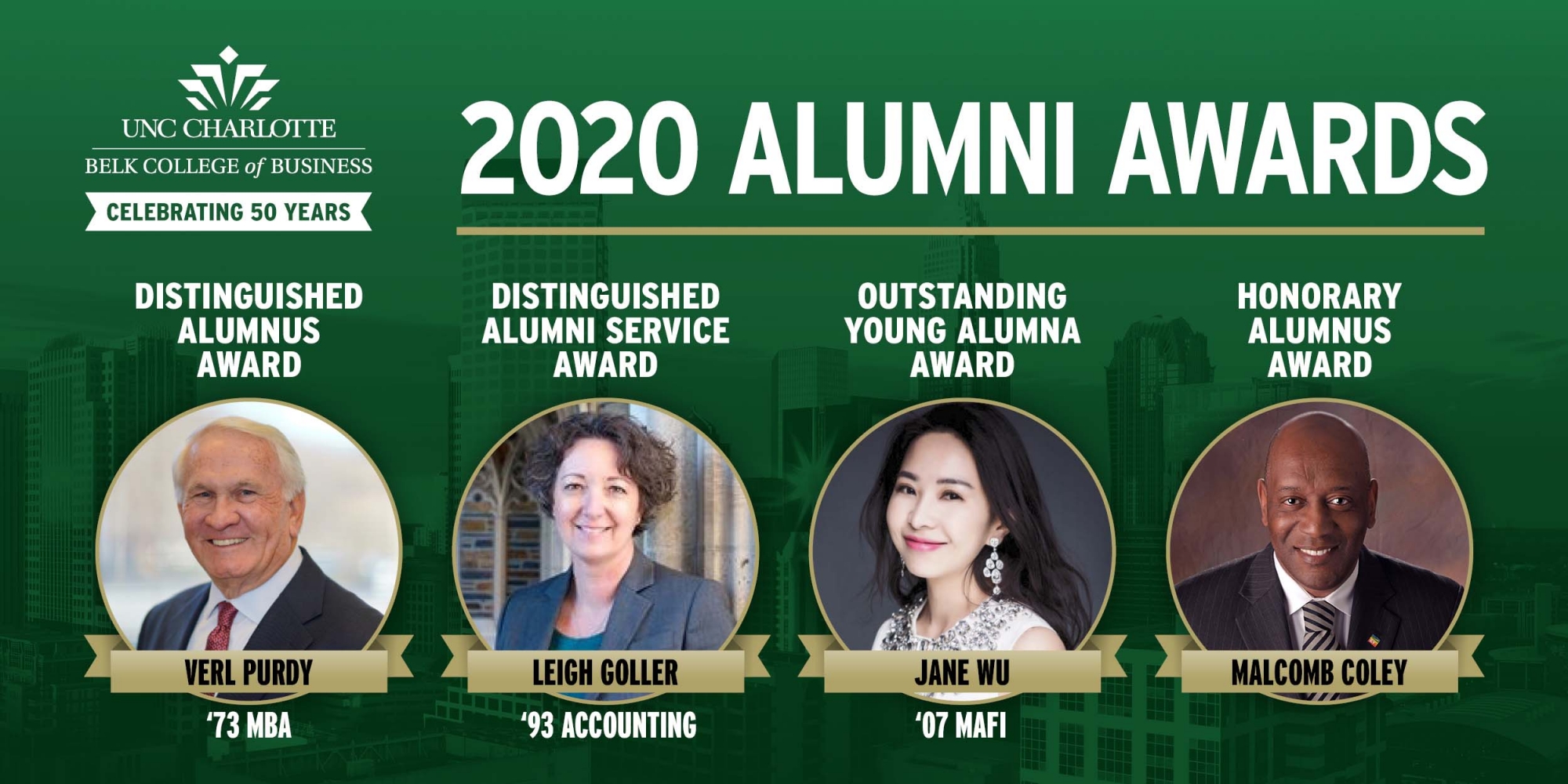 Purdy – who was among the first graduates of the Belk College’s MBA program – has had a distinguished career as a business leader and executive, entrepreneur and philanthropist.

He spent nearly 20 years in senior management positions before founding AGDATA Companies, which became the largest agricultural data marketing company in the world. In 2011, he and his family started Cadrillion Capital, which focuses on acquiring and growing companies in the tech enabled healthcare sector.

The award celebrates alumni who have had a transforming influence on the college and the community over a lifetime.

Leigh Goller ‘93 will receive the Distinguished Service Award. Goller is the chief audit, risk and compliance officer for Duke University and Health System.

Goller, who earned a Bachelor of Science in Accounting from the Belk College, serves as a member of the Turner School of Accountancy’s Advisory Board. Throughout her career, she has worked as an advocate to hire Belk College accounting graduates. She also was a strong supporter of the Thomas C. Turner  Fund. The award recognizes outstanding service to the Belk College.

She founded and serves as president of Panorama Holdings, which specializes in real estate development, investment, finance, and consultation. She has received several awards, including the 2018 Charlotte Business Journal Heavy Hitters Award, and is active in economic development activities locally and internationally.

Wu earned a Master of Science in Mathematical Finance from the Belk College. She is also an EMBA graduate from the Cheung Kong Graduate School of Business.

The award recognizes an alumnus/a who is under 40, has demonstrated achievement, and shows a promising future in business.

Coley oversees the Carolinas region and approximately 1,800 people. In addition to his client service responsibilities, Coley is significantly involved in the inclusiveness efforts for the Southeast region.

Coley is a member of the Belk College Board of Advisors. Under his guidance, EY was the first firm to support the Department of Accountancy’s Thomas C. Turner fundraising campaign, which raised more than $5.2 million in gifts and commitments.

Coley also co-chaired a diversity initiative that has helped to expose minority high school and college students to careers in accounting by introducing them to members of Charlotte’s accounting community.

The award recognizes individuals who, while not graduates of the Belk College, have made significant contributions to its leadership, vision and educational mission.

The Belk College of Business Alumni Awards are one of several events this academic year that are being held in celebration of the college’s 50th anniversary.

Green and Gold Drive Business
The Belk College of Business at UNC Charlotte has been driving business for more than 50 years. Established in 1970, the college offers outstanding business education programs at the undergraduate, master’s, doctoral and executive levels. The Belk College is one of the Carolinas’ largest business schools, with more than 4,600 students, over 100 full-time faculty, and more than 33,000 alumni. Accredited by AACSB International, the college is committed to building strong partnerships in the greater Charlotte region and beyond as North Carolina's urban research business school. Learn more about how the Belk College is driving business at belkcollege.charlotte.edu, and on LinkedIn, Facebook, Twitter and Instagram.