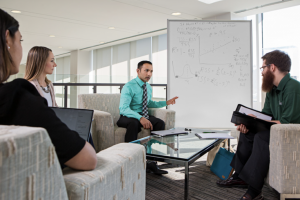 Friday, January 15, 2021
The first graduate program for working business professionals in the region launched in August 1970.

Manuel Zapata ’69, ’72 still remembers his first class in UNC Charlotte’s MBA program 50 years ago. “The professor said, ‘Welcome to the MBA program. We are going to practice with you,’” said Zapata, who had immigrated from Chile three years earlier.

Verl Purdy ’73 traveled from West Virginia to pursue his dream of becoming the first in his family to receive an advanced degree. 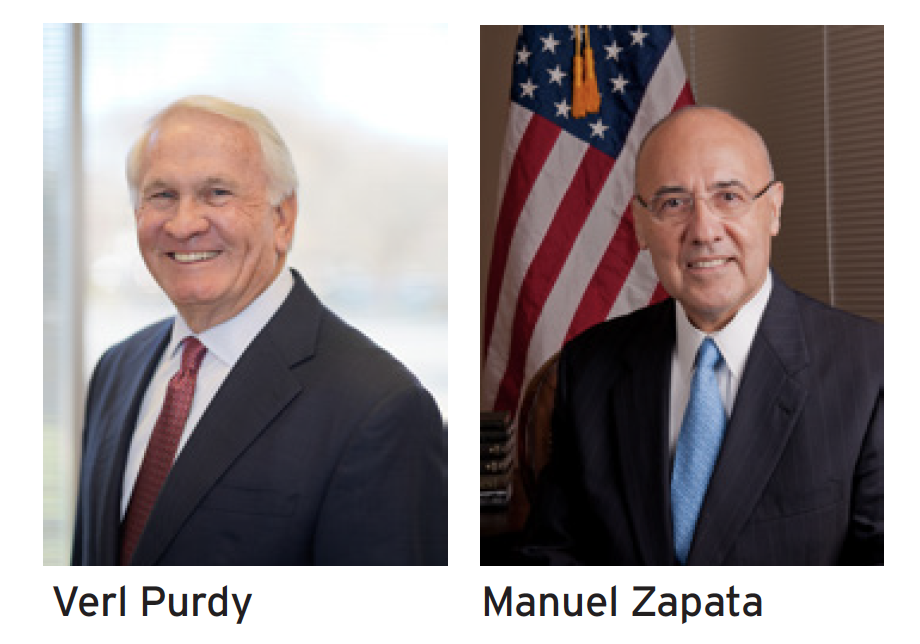 “We were a group of students about the same age,” Purdy said. “So we were in a program where we were always together. It was a great time for us, and the faculty was the same way. Faculty had never taught graduate students before. This was a whole unique experience for that, and even the dean of the business school taught some of the classes. So for us, it was a mutually exciting time.”

The MBA program, celebrating its 50th anniversary this academic year, debuted as the first graduate program for working business professionals in the Charlotte region in August 1970, just a year after UNC Charlotte launched its first master’s program.

Zapata and Purdy were among several dozen business professionals chosen from hundreds of applicants for the new program, which launched as the Master of Management. All the students selected were working full time and had at least five years of work experience.

Allan V. Palmer, a retired Navy lieutenant commander who became the Belk College’s founding dean in November 1970, created the unique part-time program at the urging of Charlotte business leaders who were looking to grow executive-level talent in the city.

A who’s who of Charlotte business luminaries were instrumental in the establishment and growth of the program. This includes Tom Storrs and Hugh McColl with North Carolina National Bank; Ed Crutchfield and Frank Dunn with First Union National Bank; Harold Hoak with Wachovia Bank and Trust; and William Grigg with Duke Power.

Zapata said most of his classes had fewer than 10 students.

“To bring experience, you had to contribute,” he said. “You learn pretty soon that management is an applied science. That’s why they wanted us to bring our work experience.”

A lot has changed in Charlotte since the program first launched, but a constant over the years has been the focus on working professionals. 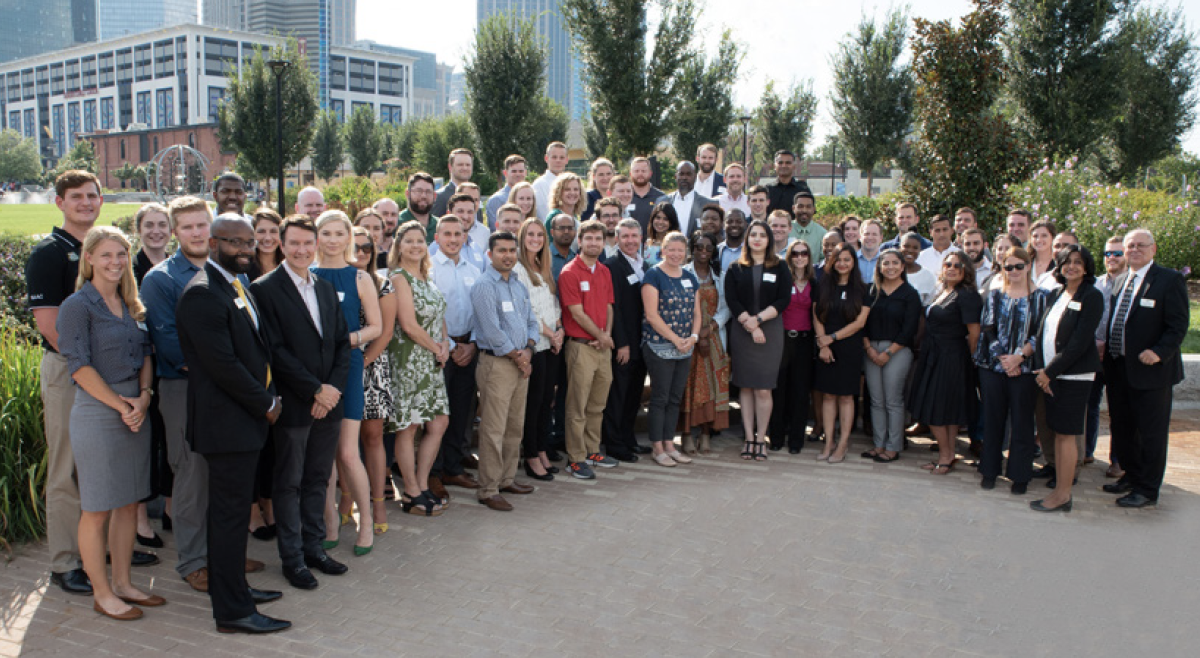 Fall 2019 MBA students gathered in Uptown Charlotte to celebrate the start of their graduate studies; the Belk College’s oldest graduate program, the MBA continues to serve the Charlotte region.

“Our program has a 50-year history of engaging working professionals as they bring their industry knowledge into the academic environment,” said Gary Kohut, director of the MBA program and professor of management. “Having a strong balance between rigorous theories and practical experiences, our graduates are able to create significant value in their organizations.”

The Belk College’s oldest and largest graduate program, the MBA has continued to grow to serve the Charlotte region and beyond. In August, enrollment in the program increased by 37% over 2019 to 455. 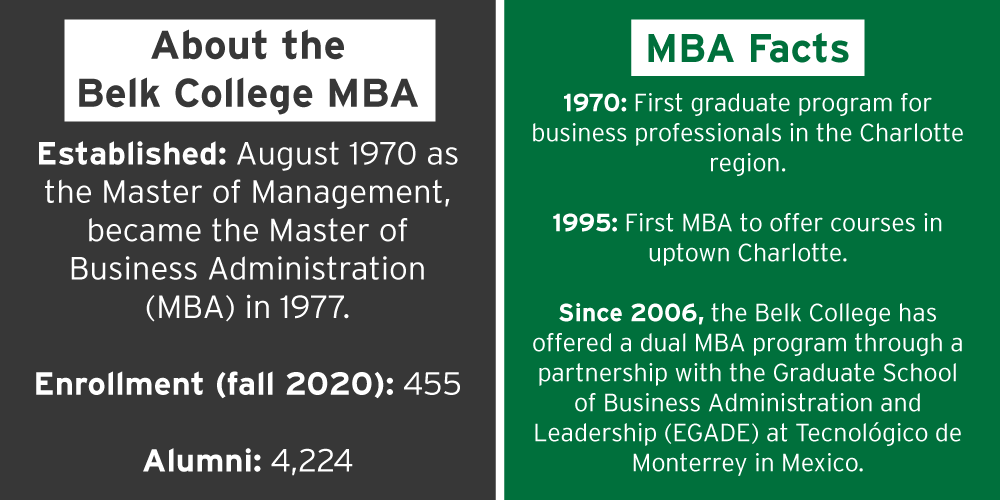 Over 50 years, the MBA program has more than 4,200 alumni, with more than half of them living and working in the Charlotte region.

“For five decades, our alumni have consistently personified the value of the Belk College MBA by achieving professional and personal goals, no matter a student’s career stage,” Kohut said. “When I think of all our MBA graduates who are now impacting our city and economy, it’s impressive that Charlotte really is built on their contributions.” 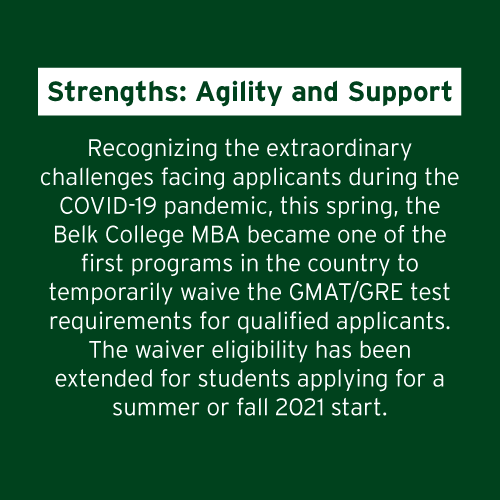 Jeanette Kuda ’14, was new to Charlotte and looking to form a network of business professionals. She said she found that with the Belk College MBA.

“Since I graduated six years ago, I have been promoted and then took a new role that I love with a fabulous firm,” Kuda said. “I don’t think any of that would have been possible without the Belk College MBA program. I also have been fortunate to build a strong network with other alumni and even work with several of them now.”

Decades after earning an MBA from UNC Charlotte, Zapata started his own engineering business. He said his MBA was even more beneficial as a business owner. “The MBA will teach you to write,” Zapata said. “I also learned to think differently. That’s the best contribution of the MBA for me. It helps you understand business.”

The Belk College MBA launched Purdy on a career path that included leadership roles at B.F. Goodrich Chemicals, BASF and Rio Tinto Zinc Chemicals before founding AGDATA, which became the largest agricultural data analysis and marketing company in the world.

“I got my MBA, I left Charlotte, and I started the most interesting international career you could ever imagine,” Purdy said. “I learned a lot about international business, and the things I learned in my MBA program are the things that guided me.”

The Belk College of Business at UNC Charlotte has been driving business for more than 50 years. Established in 1970, the college offers business education programs at the undergraduate, master’s, doctoral and executive levels. The Belk College is one of the Carolinas’ largest business schools, with more than 4,600 students, over 100 full-time faculty, and more than 33,000 alumni. Accredited by AACSB International, the college is committed to building strong partnerships in the greater Charlotte region and beyond as North Carolina's urban research business school. Learn more about how the Belk College is driving business at belkcollege.charlotte.edu, and on LinkedIn, Facebook, Twitter and Instagram.

Request Information about the MBA

Learn More about the 50th Anniversary